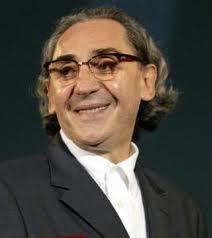 He is and has been for decades one of the most popular pop singer-songwriters in Italy. His unique sound, song-crafting and especially his lyrics, often containing philosophical, religious, and culturally exotic references, as wells as tackling or painting universal themes about the human condition – unusual subjects for pop songs – earned him a unique spot on Italy’s music scene, and the nickname of « Il Maestro » (‘The Master’, or ‘The Teacher’).

Especially, but not only, at the beginning of his career, in the 70s and early 80s, his work was standing out sharply against the rest of Italian pop scene with sarcastic, provocative, and dark attitude and lyrics attacking ignorance, lack of professionalism, and the common expectations of popular audiences, including his own public.

His work includes songwriting and joint production efforts with several Italian and international musicians and pop singers, including the long-lasting professional relationship with Italian singer Alice.

His collaborations from 1994 onward with the nihilistic-cynical philosopher Manlio Sgalambro have added lyrical references to Emil Cioran, Friedrich Nietzsche and other anarchistic thinkers.

Together with Alice, Franco Battiato represented Italy at the Eurovision Song Contest 1984 with the song « I treni di Tozeur« .